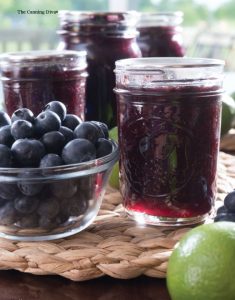 arrived from Europe.  They taught the pilgrims to use blueberries in numerous ways including drying then grinding them into a powder which was subsequently combined with cornmeal, honey and water to make a pudding.  They were also taught to use this powder as a spice rub to season meat which provided an excellent means of preservation for the lean winter months. I bet this is why Blueberry Lime Jam tastes so good as a glaze over a roast!  (Get the recipe in my cookbook, Canning Full Circle.)

Did you know, blueberries were not only used for culinary purposes but medicinally as a relaxant during childbirth and as a tonic to purify the blood.

Blueberries are revered on an international level:

There are many health benefits to eating blueberries.  For starters, blueberries are low in fat with just 80 calories per cup. Research suggests the antioxidants and anti-inflammatory properties of a blueberry can play an important role in helping to lessen the inflammatory process associated with chronic conditions like cardiovascular disease, cancer, and age-related cognitive decline.

Blueberries are high in Vitamin C which promote a healthy immune system and manganese which plays an important role in bone development. They’re also a good source of dietary fiber which contributes to heart health, helping to keep cholesterol in check.

Look for plump, firm berries with a uniform, dusky-blue color. The silvery film which covers a blueberry is called bloom.  Bloom is a sign of freshness and functions as natural protection for the berry.  Shake the container gently: Berries should rattle freely, rather than stick together.

When you get the blueberries home, discard any smashed, moldy, or shriveled ones, and don’t rinse the berries until you’re ready to use them.  Store unwashed blueberries in the refrigerator covered and they will last almost a week longer than other berries.

Fun Fact:  Over 200 million pounds of blueberries are grown every year in North America.  Michigan and New Jersey produce 66% of all the blueberries in the United States, followed by North Carolina, Oregon and Washington.